Shizuoka Prefecture is close to both the Tokyo metropolitan area and the Chukyo area. With the majestic Mt. Fuji, the dazzling ocean, and the rich natural environment, there is a refreshing environment nearby.

Shizuoka Prefecture,
the center of Japan
Shizuoka Prefecture is blessed with a long coastline facing the Pacific Ocean to the south and 3000 meter high mountains to the north, including Mt. Fuji, and is blessed with a wide variety of natural features, including the sea, mountains, rivers, and lakes. It is also located right in the middle of major cities in both the East and West allowing it to achieve unique development as a nexus connecting the East and West of Japan which has resulted in a lifestyle rich in culture and convenience.
Convenient
transportation network
Two expressways (Tomei Expressway and Shin-Tomei Expressway) and the Tokaido Shinkansen run through Shizuoka Prefecture from east to west. There is an abundance interchanges and Shinkansen stations. From many areas, it takes only one to two hours to get to Tokyo or Nagoya making it a comfortable distance for those want to live next to nature but also want to be within reach of major metropolitan areas.
From this website, you can learn how to get to Shizuoka Prefecture from Tokyo and Osaka as well as how to get around in Shizuoka Prefecture.
Pleasant climate
Compared to Tokyo, Shizuoka Prefecture has a generally mild oceanic climate with winters about 2 degrees warmer and summers about 1 degree cooler. The sunshine in winter and the breeze from the sea in summer make the climate pleasant. (In a few areas, however, strong winds blow in the winter and snow may accumulate several times a year.)

Areas and cities in
Shizuoka Prefecture 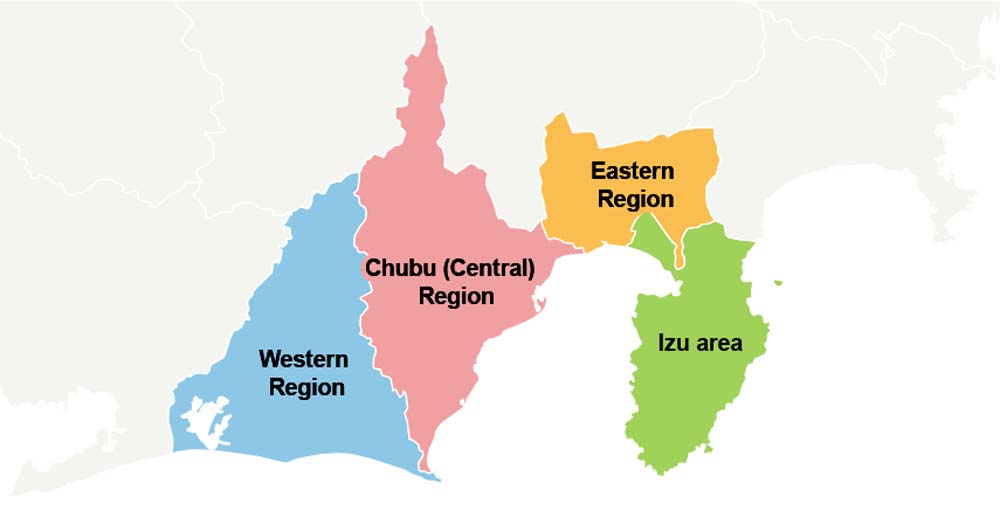 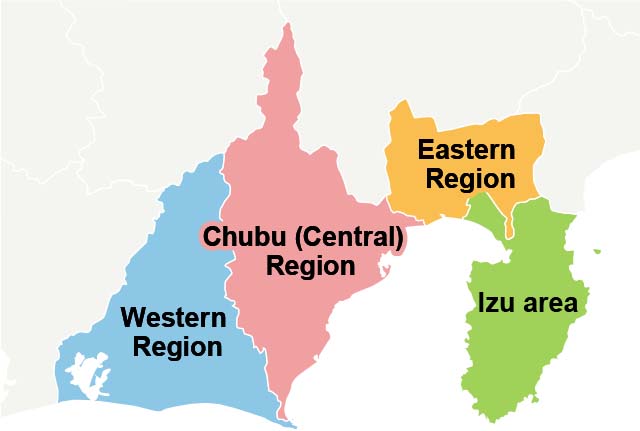 With easy access to the Chukyo area, the western region is one of Japan's leading "manufacturing" areas with a focus on musical instruments, motorcycles, and automobile-related industries. It is also one of the most rural areas in Shizuoka Prefecture, dotted with temples, shrines, and historical sites. Here, you can feel history in a relaxed setting, surrounded by peaceful landscapes. This area is recommended for those who want to enjoy leisure while working, and for those who want to enjoy a quiet country life.

In addition to being the center of commerce and culture, the Chubu area is full of natural beauty from the Southern Alps to Suruga Bay. In addition to the convenience of living in a midsized city, the area offers a wide variety of lifestyles. One can live comfortably in harmony with their natural surroundings as well as enjoy a wide variety of hobbies which could include surfing one day and hiking the next.

The area boasts the majestic Mt. Fuji, which changes in appearance from season to season. This area is blessed with pure spring water from its melting snow, and delicious foods nurtured by that pure water. The area around the Shinkansen station is also home to many people who commute to the Tokyo metropolitan area for work and school. This is a popular area for those who want to live in the country but who would like to feel the energy of the big city from time to time.

This area is popular as a tourist destination due to its abundant hot springs and easy access from Tokyo. The area has a rich natural environment including the sea, mountains, rivers, as well as the charming landscape of Japanese hills, “Satoyama”. Feel the changes of the seasons firsthand, raise children in a rich natural environment or even start a business using local resources. Although there are few urban conveniences here, there is fulfilling life full of possibility waiting for you in Izu.

Comparison between
Shizuoka and Tokyo

We compared life in the Tokyo metropolitan area, where most of you live, with life in Shizuoka.

Shizuoka Prefecture is about 2 degrees warmer in winter and about 1 degree cooler in summer than Tokyo.The sunshine in winter and the breeze from the sea in summer make it feel more comfortable.
However, in some areas along the coast, strong winds may blow when the atmospheric pressure is in a winter pattern.In some mountainous areas, such as around Mt. Fuji, there may be snow or frozen roads several times a year.

Shizuoka Prefecture is an area where it is easy to live a comfortable life, as it takes less time to commute to work and return home earlier than in Tokyo.Commodity prices are almost the same as the national average.Retail prices at supermarkets are almost the same as in Tokyo, but in Shizuoka Prefecture, you can taste fresh local produce by buying rice and eggs directly from the producers, using produce stands, and sharing with your neighbors.
Although Shizuoka Prefecture has a well-developed transportation network of Shinkansen lines and expressways that crisscross the prefecture, the number of train and bus routes and the number of public transportation services are still less than in Tokyo.Many people own at least one car per family and use it on a daily basis.There are areas where it is possible to live compactly without using a car, but the areas are limited, so it is important to gather information.

The ratio of owner-occupied houses and the site area of houses in Shizuoka Prefecture are almost the same as the national average, but it is possible to build a larger house for about 30% cheaper than building a house in Tokyo.Private rental housing and garage rentals are also much cheaper than in Tokyo.There is also more room for one parking space in many cases than in big cities.